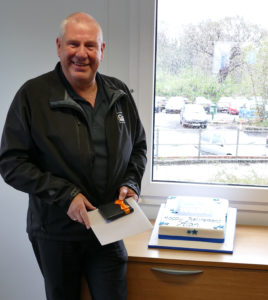 Alan Steel, Whale Tankers’ Regional Sales Manager for Scotland, is due to retire this month and will be saying farewell to colleagues and customers alike at this year’s CV Show.

Chris Anderson, Commercial Director for Whale Tankers, said: “We’re obviously very sad to be saying goodbye to Alan, but everyone at Whale wishes him a long, happy and healthy retirement.

“Alan has made a fantastic contribution to the sales effort at Whale over the years which has had a considerable impact on our business success. He has been an excellent ambassador in representing our interests ‘north of the border’. We’ll miss him from both a professional and personal point of view.”

Alan said: “I’ve had a great time during my time at Whale and I’ve had the privilege of working with some very knowledgeable and high skilled people within the company. I’ve learned a great deal about the tankering industry as a whole, having been involved in all aspects of the business.

“I will miss working with all my colleagues, particularly everyone in the sales team, but I have to say that won’t miss the 50,000 miles of travelling I’ve been doing every year, although this has been an important part of my job.”

Having worked at Whale for just over 10 years, Alan began his career with British Leyland before moving into the bus sector working for Western Scottish as a PSV mechanic. His tanker experience was initially gained while working for a contract hire company where he worked on council vehicles before moving into fleet management involving plant vehicles including tankers. It was this that later led him to join Whale where he moved into a sales role.

Scottish born and bred Alan originally hailed from Dalbeattie in Kirkcudbrightshire and after spending time in Dumfries and Lanark, he now lives close to the Cairngorm National Park.

Alan added: “I wish everyone at Whale continued success for the future. In the meantime, I’m looking forward to doing some travelling throughout Europe with our caravan and to playing some golf.”

Robert Frew is taking over as Regional Sales Manager for Scotland after the CV Show.