SHOW LEADS TO BUSINESS FROM THE CLANCY GROUP FOR WHALE

The KaiserWhale continuous dirty water recycling machine for the Clancy Group, featured at this week’s PAWRS exhibition, was itself ordered after the customer first saw a similar vehicle on a Whale exhibition stand.

A chance visit to the Whale Tankers stand at the CV Show in 2013 was to eventually culminate in an order for two of these highly specified machines for plant hire specialists, The Clancy Group plc. Their Group Transport Director Mike Revell takes up the story.

“We had taken over the Southern Water contract and five vehicles in the fleet that we inherited had dirty water recycling capability, so we were already familiar with the basic technology. I went to the CV show in April 2013 where I met up with the Whale sales team. They had a KaiserWhale exhibit on display and they talked me through in some detail on how Whale had further developed the concept, particularly with regards to their liquid ring pump.

“I could see the very real potential for this kind of vehicle in our operations, so I went away and formed a small project group back at our headquarters in Harefield. We looked at our requirements, worked out the specification that we would need, visited the Whale factory at Ravenshaw on a number of occasions and, eventually, did the deal. Now the first of two new KaiserWhales in our distinctive green and red livery is on display at the PAWRS show, ready to go into service.” 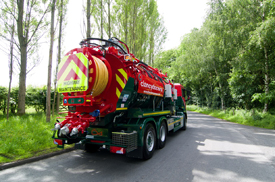 The vehicle exhibited at the PAWRS show is based on a 26t Euro 6 MAN chassis and the KaiserWhale brings together high performance jetting and vacuum operations with a fully integrated filtration system, providing continuous dirty water recycling. By effectively reusing dirty water for jetting, it maximises time spent working, while minimising time wasted tapping into clean water supplies.

The powerful liquid ring vacuum pump, providing up to 2000m3/hr/1178cfm, is available in a single or double arrangement – mounted inside the tank gives increased efficiency, better cooling and lower noise levels, as well as giving additional frost protection. The high pressure pump has been specifically developed for dirty water recycling and features Rotomax, a unique single self-cleaning filter system.

The Clancy Group Plc through its operating companies has established itself as one of the most successful family owned construction businesses in the UK. Started more than 56 years ago, the third generation of the Clancy family is now working in the business, which today has an annual turnover of around £250m and employs more than 2,200 staff across nine UK locations. 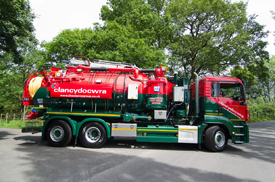 The two new KaiserWhales will join the Plant Hire division of the business, which has more than 6,000 pieces of plant including transportation vehicles. Much of the growth of the business in recent years has come from diversification into areas such as pipelines, rail and special projects. However, work with the utility companies still is very much a core business and the new vehicles will be earning their keep on a contract with Southern Water. The two new Whales will bring the dirty water recycling fleet up to seven vehicles in total and cover operations in Kent, Sussex, Hampshire and the Isle of Wight.

Mike Revell, who is about to retire from the Clancy Group, is full of praise for both the new vehicles and Whale Tankers.

“The new KaiserWhales are ideal for our requirements – they have been designed to be a multi-purpose contractor’s vehicle, giving powerful jetting and sewer cleaning capability. Although the vast majority of our work is domestic, they gives us the flexibility of deployment on larger jobs. In either case, they can stay on the job longer and investment in dirty water recycling technology is commercially viable for us as we work on meterage, rather than day rates.

“We like to buy British products built by British companies and my first visit to Whale Tankers’ factory in the Midlands left me was a lasting impression of a highly professional company. Right through the project – from specification, through to negotiations and into build, they have listened to what we have wanted and delivered on their promises. It just goes to show, exhibiting at trade events does sometimes generate serious enquires that can lead to significant orders.”

About the Author: Whale Tankers