Branded eWhale, and being unveiled for the first time at this year’s CV Show, this latest multifunctional gully cleaner and drain jetter has been designed to enable both local authorities and private sector contractors to operate in inner city, ultra low emission zones (ULEZ). And with several UK cities already having pledged a commitment to support the Government’s continued pledge to reduce exhaust gas emissions from diesel powered vehicles as a means of driving down air pollution, the 19-tonne GVW eWhale’s impending introduction could not be more timely.

Not surprisingly, in addition to the eWhale’s main environmental attribute being its zero emission status, it has also been conceived to deliver a number of improved operating efficiencies. Featuring two banks of chassis mounted lithium battery packs that deliver power via a 9 phase process to a 250kW electric drive motor, eWhale has the capacity to remain fully-operational over a normal vehicle shift pattern. 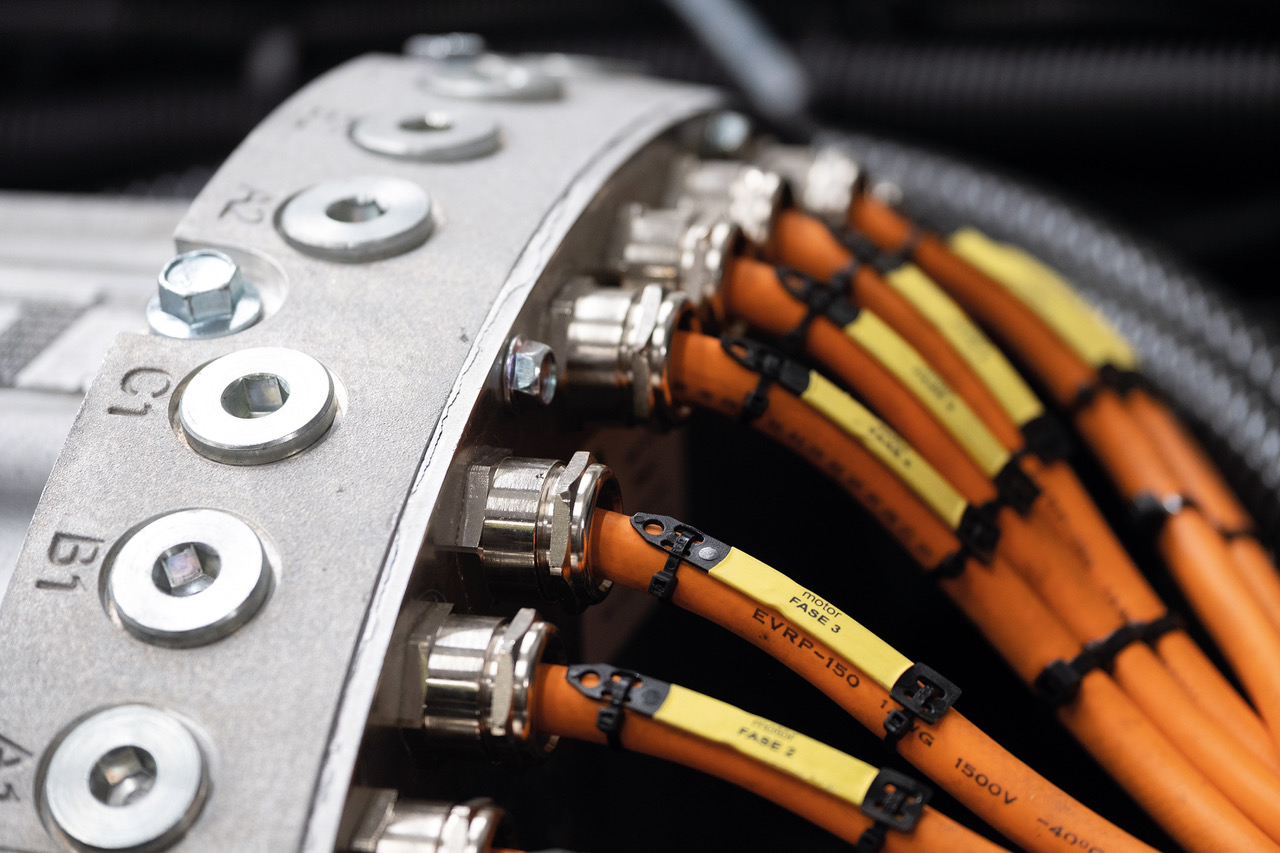 And with the battery packs proven to withstand more than 3,000 charges over an expected 10-year period of normal operation, the eWhale has been designed to require very low maintenance, whilst also featuring equally low running costs.

The eWhale is also environmentally-friendly when it comes to noise pollution due to it being extremely quiet in operation, making it more suitable for inner city night-time environments than current diesel powered vehicles.

A further feature of the new all-electric eWhale, which is capable of being mounted on a range of both low-entry and standard cab chassis, is an additional electric instrument control panel that details battery capacity, gear position, range prediction, regenerative power and system status information. Finally, the vehicle’s battery system is charged via a 63 Amp, 3 phase neutral and earth power supply, complete with RCD type A 30 mA protection, for which a 10m charging lead is supplied as standard.

Being showcased at the CV Show with a twin compartment tank – one featuring a water capacity of 3,600 litres, the second 4,600 litres for debris/sludge – the eWhale also incorporates a new control/display system. The PLC unit has an increased range of programmable I/Os for different implementations and comes complete with an IP 67 rated leak-proof aluminium/plastic housing. Similarly, the display not only enables remote connectivity and has excellent sunlight readability, it has inbuilt wide viewing angles and high-end graphics which, complete with a 7” resistive touch screen, make it fit for most purposes.

Additional features of the eWhale include:

Commenting on the eWhale development programme, Whale Tanker’s Commercial Director, Chris Anderson said: “The eWhale is the perfect example of Whale Tankers’ overriding ethos of remaining at the forefront of engineering innovation and compliance. We have invested in the creation of a solution that will prove to be a forerunner in carbon neutral municipal vehicles of the future. In addition to aligning the eWhale to the Government’s stance on creating ultra low emission zones, we have focused on ensuring that this MVC has what it takes to operate efficiently and effectively in its normal working environment. Not surprisingly, we have already received approaches from a number of industry-leading waste management contractors who are understandably keen to trial it in the field. 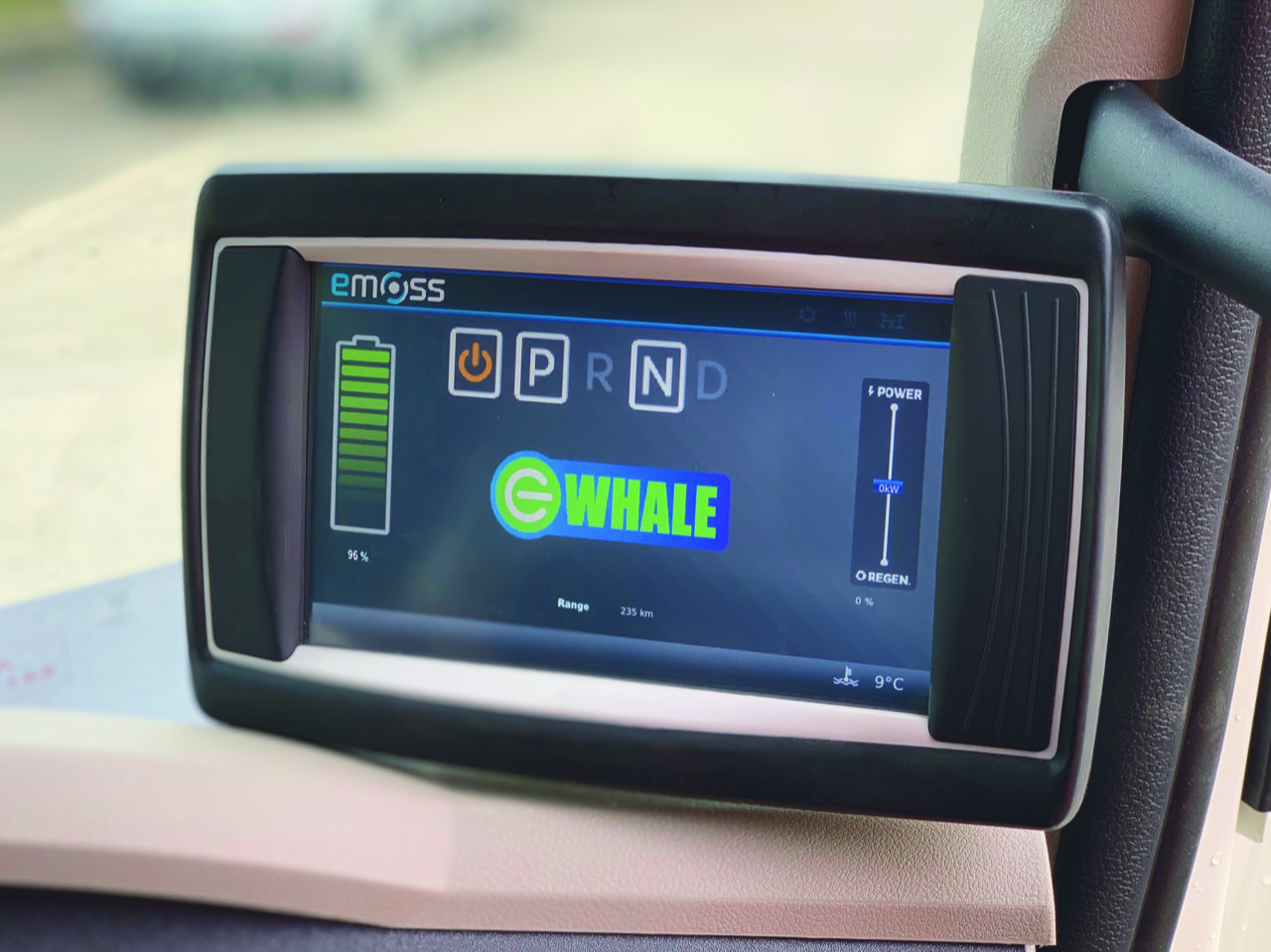 “Given that eWhale is the result of an 18-month research and development programme, it would be remiss of me not to thank the entire team at Whale, and our suppliers, for their support and endeavour in turning the concept into reality,” he added.

In terms of its gully cleaning and drain jetting capability, the eWhale is as innovative as the electric drive system used to power it. At the forefront of the technology deployed in this area is a new coalescing de-oiler unit that reduces discharged oil from the onboard Mistral 402 series exhauster/compressor vacuum pump by 99%. Compatible with all current compliance regulations, the de-oiler extracts mist that occurs within the pipework and captures it so it can be disposed of in a controlled and acceptable manner.

The jetting power of the eWhale comes via an ORCA 250 high-pressure pump that delivers a 125l/min flow rate up to 125 bar. Operated via a rear control panel, the pump supplies both a primary and self-aligning, 100m hydraulically-operated hosereel, or secondary manual 30m reel.

Completing the eWhale equipment itinerary is a 5” full bore gully boom that provides 300-degree rotation. Fully counterbalanced for ease of operation and featuring an air assisted sludge breaker, the gully boom is equipped with Whale’s boom handle that is designed to meet the latest health and safety statutory instruments.

About the Author: Shane Rhoden